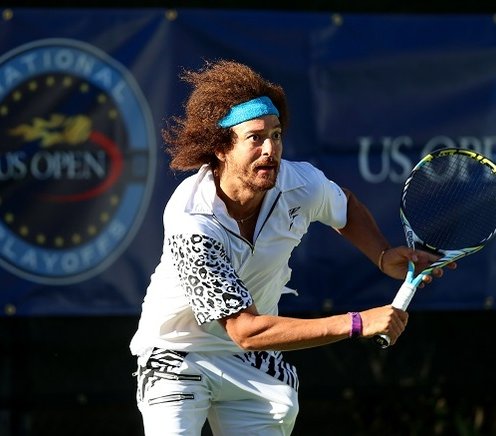 Gray beat Redfoo — whose real name is Stefan Gordy — by a score of 6-1, 6-2. Early on, Redfoo had some troubles with his sneakers, but those later were fixed after he swapped shoes with a fan.

On Thursday, the 37-year-old Redfoo followed up his singles defeat with a 6-3, 7-6 [4] loss in doubles play alongside University of Georgia freshman tennis player Ayaka Okuno, whom he coaches.

Always have so much on court playin w @redfoo Had such a close one, fought hard! Can't wait for next time we play!

RedFoo of LMFAO at US Open Qualifying 2013!

Rapper, Musician Redfoo Tries to Qualify for the US Open ...

Redfoo lost a US Open tennis qualifier in borrowed sneakers