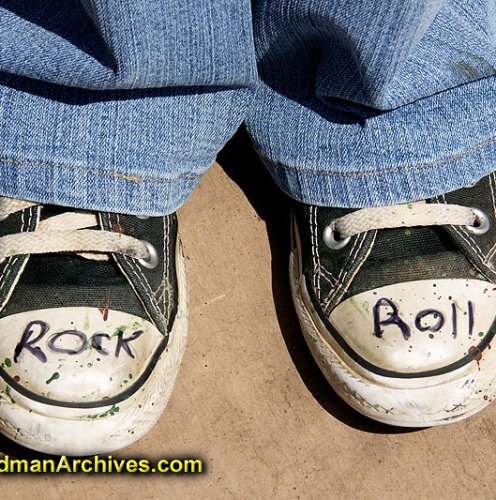 "We were pretty conscious of wanting to look a certain way. We wanted people to recognize us as being in a band when we walked down the street, even if they didn't know which band we were. Chuck Taylors signaled that."

— Albert Hammond Jr. of the Strokes, in Spin magazine 2012

If you want to project an image, you gotta have a style. For footwear, pumps say something. So do wingtips. And so do Converse Chuck Taylor sneakers: Put on some Chuck Taylors and a pair of skinny jeans and you look like someone ready to strap on a guitar.

But what exactly is it about these shoes — or any fashion item — that allows them to express personality? That's the crux of an aggressive trademark infringement action brought by Converse that also raises a broader question: Why do we choose to dress as we do?

If you aren't sure about Chucks, picture the high-top sneakers with the rubber toe cap worn by old-time basketball players like Wilt Chamberlain, who scored 100 points in one game while wearing them. In "West Side Story, " the Sharks wore them. In Rocky, Sylvester Stallone trained in them.

In the mid-1970s, Chuck Taylor sneakers started showing up on the feet of underground rock bands (Blondie, the Dead Boys, members of the Ramones), giving cheap canvas shoes the street fashion cachet of an expensive leather motorcycle jacket. Athletes don't wear Chucks anymore, but musicians still do, and so do kids who want to look cool, and certain misguided baby boomers who think it's still possible they can look cool.

Converse generates about $1.7 billion in sales, according to The New York Times, and wants to protect its brand. So the company, owned by Nike, has lashed out at dozens of competitors, alleging they infringe on Converse trademarks by selling knockoff versions of Chuck Taylors.

Some of the competitors' shoes look a lot like Chucks. But winning these lawsuits won't be easy. Fashion is more than fickle, it's an elusive attribute, making it sometimes difficult to describe why some shirts are more attractive than others, or why exactly Chuck Taylors are unique.

Under trademark law, Converse will have to meet a high standard to protect its design because, really, sneakers are sneakers. The company will have to prove the Chuck Taylor look is specifically associated with the brand in the mind of the consumer. "It can't just be that consumers like your design, " University of Pennsylvania law professor R. Polk Wagner told the Times. "It can't just be that your design is different or novel or interesting."

This freedom given to manufacturers to riff on each other is great for shoppers. It's the reason that high-fashion trends turn up so quickly on the racks of discount chains. But at some point borrowing can become stealing. Luxury designer Christian Louboutin, known for its red-sole shoes, successfully sued Yves Saint Laurent for copying that attribute.

Jethro Tull - Too Old to Rock and Roll, Too Young to Die