Another view: Table tennis pro Gina Rogers on Balls of Fury May 30, 2015 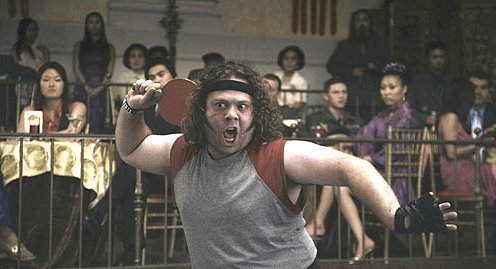 You couldn't call this film realistic, but it's hilarious. It's about a guy called Randy, played by Dan Fogler, who played table tennis as a boy in the 1988 Olympics, but lost in the final round. Now, 19 years later, an FBI agent needs him to get into the underground table tennis scene to take down a triad gangster table tennis lord, played by Christopher Walken.

Fans of the game should take the film with a pinch of salt. There are overhead serves, which professional players would never do, and a couple of times they even play with wooden spoons. In the final showdown between Randy and the triad lord, they leave the table altogether and end up rallying the ball through forests and over a wooden bridge. Most of the rallies obviously use CGI - they're very impressive, but watching table tennis is so amazing anyway, it would have been better if they'd just filmed a real game.

It's difficult to tell whether any of the actors can actually play, but Fogler is great comedy value. At the beginning, when he hasn't played professionally for 19 years, he's working in horrible little clubs showing off his skills. In one scene, he even bounces a ball off the head of someone in the audience. Despite this, the film does a lot to raise awareness of the sport. After I'd seen it, all I wanted to do was pick up my bat and have a knockaround.

As far as I know, there's no underground scene like this in England - at least I hope not, because this one is pretty extreme. The gangsters play by sudden death, so if someone loses a game, they get shot in the neck. That's not a policy endorsed by the English Table Tennis Association. For us, it's the taking part that counts.

Gina Rogers is development assistant at the English Table Tennis Association, and a former member of the junior England table tennis squad. Balls of Fury is on general release.