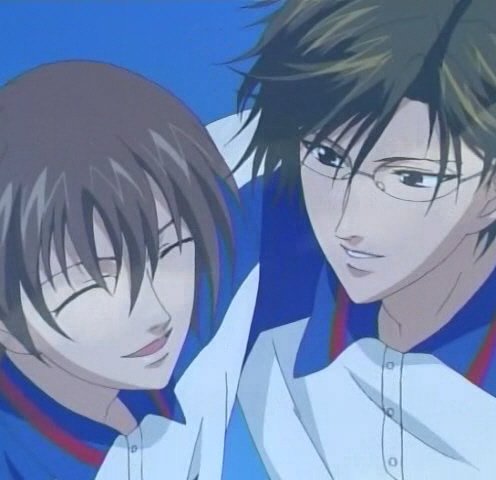 A/N: I do not know for sure where the term 'Emerald Pair' first originated, but the first time I ran into it was in whisper132's absolutely wonderful Honorable Society.

Also, I do not find it likely Konami will make Fuji play Kirihara again, or the Golden Pair against Niou&Yagyuu, but they do now for the sake of the fic. (Well, that and somebody had to lose. My original line-up for the fic had Fuji in Singles Three, but he looked at me with a smile and told he wasn't about to lose, thank you very much.)

"Singles Three will be Echizen, " Ryuzaki-sensei told the assembled regulars. "I trust you will bring us victory this time, Echizen."

"...Yes, sensei." The first-year nodded, tugging his cap down as though to hide his disappointment, and waited for the coach to continue announcing the game order.

And, naturally, she did. "Doubles Two… Kikumaru and Oishi, " she said seriously. "Let us see the power of the Golden Pair once again. And as for Singles Two –"

"Wait, baa-san, " Momo interrupted her. "Shouldn't Eiji-senpai and Oishi-senpai be Doubles one? Or are you going to pull some weird combination for that again?"

"No weird combinations, " their coach replied calmly. "Doubles One will be played by the ones most capable of winning it – Inui and Kaidoh."

"Huh?" All the regulars seemed startled by her decision – Inui and Kaidoh most of all. Only Tezuka's expression stayed unchanged as ever.

"I think this is for the best, " Ryuzaki-sensei said. "If we look at the results of recent matches, it only makes sense."

"She's right, " Fuji said, nodding slowly. "Aside from their very first match, Kaidoh and Inui have won all of their matches. On the other hand, Oishi and Eiji –"

"Haven't managed to get a single win after the Tokyo Prefecturals, " Oishi finished for him. "You are right, Ryuzaki-sensei. It would be arrogant of us to demand the Doubles One spot."

"But – but – but!" Eiji protested. "It was because Oishi's wrist was injured! And we even reached the Synchro! If your wrist is all better, everything should be all right, Oishi! We won't lose again!"

"Eiji." Oishi set a calming hand on his doubles partner's arm. "Calm down, Eiji. It'll be better this way."

"But Oishi, you promised!" the red-head continued. "How can we be Japan's number one doubles team if we are playing Doubles Two? Don't you want to keep our promise or what?"

"Eiji, " Oishi sighed, "this is not about what I want or don't want. This is about making our team as capable of winning the tournament as possible."

"Eiji-senpai, I –" Kaidoh started, sounding uneasy, only to be interrupted by Inui.

"Eiji, " the data player said seriously, "the chances of you winning against Rikkai's Doubles Two team are 87. However, if my calculations are correct, there is only a 5 chance you might actually beat them in Doubles One. Therefore, it would be sensible to follow this order."

"Whaaat?" Eiji said. "You're saying that you and Kaidoh would do any better? You've only ever played four matches together!"

[The K - THAISUB ]The prince of tennis Pair puri EP 1