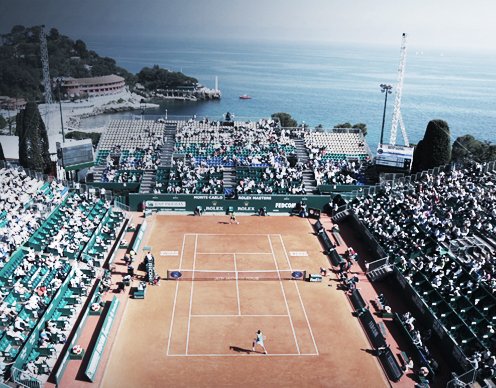 World No. 1 Novak Djokovic showed he is the player to beat during the 2015 claycourt season, on Sunday turning back a red hot Tomas Berdych 7-5, 4-6, 6-3 to win a career second Monte Carlo title.

The Serb extended his winning streak in early 2015 to 17 straight matches, and is the first player in ATP history to win the first three Masters events in a season following Indian Wells and Miami.

“The fact that now I won (the first) three Masters 1000 in a row and nobody ever has done that, of course I’m aware of that, ” Djokovic said. “That has given me more motivation. I’m very proud of what I have achieved. It can only serve as an incentive, imperative for what’s coming up.”

It was also his 11th straight victory in a Masters final, improving to 52-23 in championship matches. In the semifinals Djokovic tamed the confidence-challenged Rafael Nadal in straight sets.

Berdych broke Djokovic in the opening game, and after about a 90-minute rain delay in the second set the Czech broke for a 4-3 lead and eventually forced a third. In the deciding set Berdych’s forehand broke down, and Djokovic ran out to a 4-0 lead en route to the title.

“I left him a big gap in the third set, ” Berdych said. “That was the decider, definitely. It was really just about a couple of points that didn’t go my way. He defended them very well.”

“It was a battle, ” Djokovic said. “I was up a set and 3-2, then a (rain) interruption, we came back, I had a break point but he played some amazing shots. If I made the break there, maybe the match could be done in two sets.

“He had his chances as well. The third set started very well at 4-0. I just lost that service game for no reason. After that, every single game went the distance: deuce, advantage. It was a real fight. I was trying to mentally stay tough and fight my way through.”

Berdych dropped to 2-19 career against Djokovic, but cited 2015 as one of his best starts to the season.

“I think I’m doing pretty well, but there are some things to still keep improving, ” said the Czech who fell to 10-17 in career finals. “I’m going to try to work on that.”

Djokovic, who has won his last 21 straight Masters matches, now gets two weeks off to rest before Madrid.

“I’m 27, ” said Djokovic. “Obviously I’m experiencing the time of my life on the tennis court, and also private life is very good. I became a father. I’m just trying to sometimes pinch myself and say, ‘Where am I at this point in my life?’ I’m very grateful for this, for everything that I have. That’s the kind of philosophy.”

Novak is 11-1 this season against Top 10 players. He has also won 18 of the last 39 Masters vents, and with his title the Big Four have now taken 42 of the last 46 Masters titles.