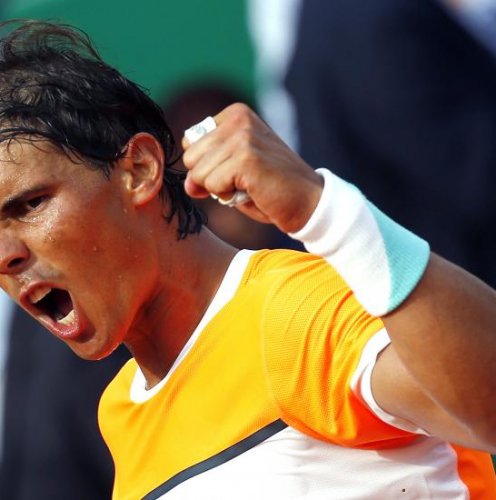 World No. 1 Novak Djokovic upped his Masters win streak to 17 following a 6-1, 6-4 win today over Albert Ramos-Vinolas in the second round at the Monte Carlo Open.

Playing his first clay match since his 4-set French Open loss to Rafael Nadal in the final, Djokovic was pleased with his performance.

“I felt very good, ” the 2013 Monte Carlo champ said. “I thought, considering the amount of months that I haven’t played on the clay courts, to play against somebody that is a clay-court specialist, and win in two sets, I thought it was a very good performance. I can just take positives from today.

“Of course, the fact that I’m playing at home, in a way, because I spend a lot of time in Monte Carlo, I practise in this club over the course of 12 months, hard courts, clay courts, I know people who are doing the courts, friends with them – it really is a different and very special feeling. So I’m trying to enjoy it and see how far I can go.”

“It’s never easy, especially in the first match, having an opponent like that, ” said Dimitrov who will play Fabio Fognini Wednesday. “Verdasco is known for his strength, especially on a clay court. I’m really happy with the win because it shows that I’ve done something right in the days coming into the tournament.”

David Ferrer, Marin Cilic were winners on a day when seeds were a perfect 8-0.

Among the headliners on a packed schedule tomorrow are 8-time champion Nadal who returns to take on Lucas Pouille and 4-time runner-up Roger Federer is on court against Jeremy Chardy in a rematch of a tough battle a year ago in the Rome wind won by the Frenchman. Also, Stan Wawrinka begins his title defense against Juan Monaco.