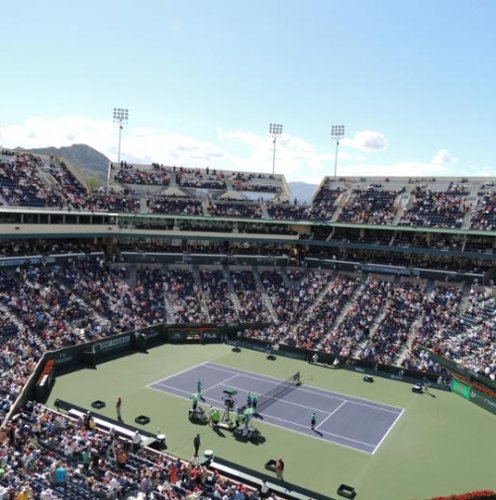 “At the moments when I was playing those match points, it didn’t really feel like match points, ” said Raonic who had never beaten Nadal before Friday. “It was just like another point that I was trying to get through… [I was] just sort of going through the paces at that moment of what do I need to do now, not really signifying it as a match point.

“I feel obviously all sorts of good, ” said Raonic. “Obviously there was a lot of up and down through that match, and all I could ask of myself was just keep competing and hope to find a way. I got fortunate a few times and it worked out.”

We knew Raonic had the monster serve and we knew Rafa doesn’t like playing those type of players – big servers that don’t give him a lot of rhythm – but I didn’t see that 5-5 break coming and I didn’t see Raonic ever breaking Rafa period on that court. But full credit to the Canadian who kept pounding serves and cracking that cross-court inside-out forehand. He really went after Nadal’s forehands.

What’s more impressive is I thought Nadal played pretty well actually. Much better than he did in that loss to another big man in Australia, Tomas Berdych. A few minor blips here and there (stands far too back at times), but otherwise a solid match from Rafa.

“I think I did well, ” said Nadal. “I enjoyed the fact that I felt well with myself on court again. I felt competitive. I felt strong, with the right energy. I lost that match thinking much more positive things than negative ones.”