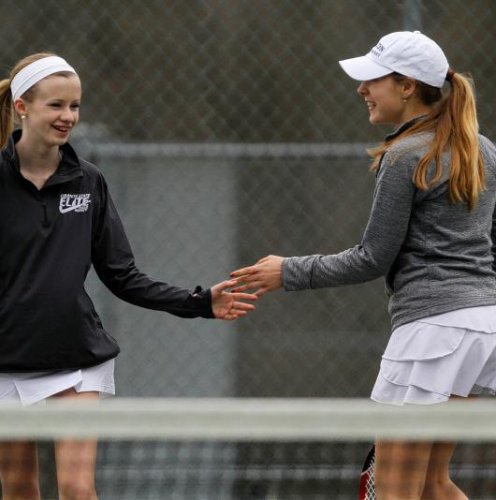 Identical mirror twins, Berklee (left handed) and Colby (right handed) Vaillancourt, from Derryfield took the courts on Sunday, June 8th hoping to take the title as Girls’s doubles champions, and they were successful! Colby, who is number one on the Derryfield team had a broken left hand at the time of the match, but played anyway with help of her sister Berklee who is ranked number two but who was ranked number one the year before. Talk about trading places!

They had an extremely difficult set of opponents, playing seeded players since the quarterfinals. In the quarterfinals, the Vaillancourts competed against Ainsworth and Windeler of White Mountain and took the win 6-1, 6-2. The next match for the semifinals had a similar outcome, 6-2, 6-2, playing against Davis and Hankel of Hanover. The final round however, was more challenging. The sisters played against Burbine, the woman’s singles champion and her teammate Milosavljevic, both from Londonderry. The first set the sisters won, 6-3, but the second set wasn’t as easy and they lost 4-6. Playing an additional set to determine which pair would take the title, the Vaillancourts came out on top winning 6-3!

Despite the challenge of both a broken hand and having all competitive opponents, the twins persevered and took the title! Next year, the Vaillancourt sisters are headed to Connecticut College in New London where they will play field hockey. Congratulations, Berklee and Colby for winning the title of women’s doubles champions!

Take a look at the winners from this year and previous winners!

On Saturday, June 7th, the top high school tennis players from all three divisions across the state of New Hampshire took to the courts to find out who was the best. Each player, seeded based on in-season rankings, was randomly matched with various opponents until defeated, which immediately eliminated them from further tournament play. By the end of the day only 4 players remained in each of the boys and girls divisions