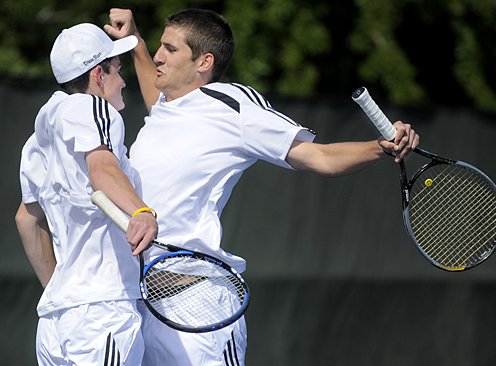 With a district championship medal around his neck, 17-year-old Santa Monica High School junior Evan Hiltunen is a tennis prep star. He’ll be competing in the CIF Tournament this week along with his doubles partner, Nikola Hatch. That however, is not the most impressive thing on his resume.

What stands out among anything else Hiltunen has done in his high school career is starting up and running an actual private hedge fund along with fellow 17-year-old junior Nick Gottlieb. If that’s not an indication of either one’s own genius or educational institutional success, what is?

Both kids grew up with a family background in the business world. Hiltunen’s father has Wall Street experience and also managed bonds for TD Ameritrade for 20 years. Gottlieb’s father was also a hedge fund manager and the example in which the two teens looked at as the template for their success.

After his bar mitzvah, Gottlieb was sitting on $3, 500 cash and at didn’t know what to do with it. He eventually picked up business traits and became a natural at it with small ventures of his own.

“It was actually really funny, ” Gottlieb said. “I remember going to the post office when I was 16 years old to file my tax return, and having everyone there surprised that I was already paying taxes.”

Their true education steamed from their entrepreneurial endeavors. Hiltunen made his first stock market investment in the seventh grade and saw it grow by 25 percent. Before that, he ran his first business selling electronic accessories online that he would buy in bulk from Chinese wholesale companies for cheap. Business is in his blood and he was always the mathematical standout in his class since elementary.

Hiltunen and Gottlieb met in their sophomore year through their fascination of the stock market. In April of 2014, they decided to join forces and start their own hedge fund that they now call Alpha Bay Capital.

They got their company incorporated in Delaware with the help of Gottlieb’s father, who took care of all the regulatory and legal matters since the two are still minors. Then they got sponsored by TEDx youth for their own home office in the ROC (Real Office Centers) in Santa Monica. Hiltunen’s described his role in the hedge fund as the account executive who brings in the customers and keeps them up to date. He even takes them to dinner.

It may sound farfetched and even quite possibly a burn at the ego for an adult to trust a kid with their hard earned money to go invest in the stock market with the expectations of achieving capital gains. However in Santa Monica, fortune favors the bold, and investors of all ages have sought out these two wonder kids for both their brains and their boldness.

“Our customers like to invest with the younger people because we’re willing to take risks, ” Hiltunen said. “So we’re investing in stocks that have a higher beta, which means they move up a lot faster than the market does. For example, if a stock has a beta of two, the market moves up 100 points, this stock will move up 200 points but also if it goes down 100, it’ll go down 200. So we like to mess with those and we’re really confident in what we invest in.”

Despite not even being old enough for happy hour, Hiltunen and Gottlieb have a wealth of trading experience and claim the track record to back it up as well.

RT @johnvarlas: Congrats to Carmen Saab and Mary Jane McCaghren of St. Mary's! They end their terrific high school careers with a second do… Fri, 22 May 2015 09:54 PM