What is Tennis Davis Cup? 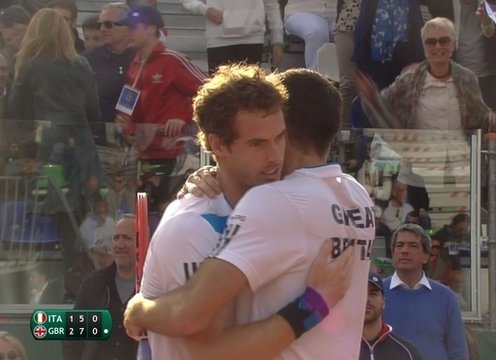 Entering Friday, he had played 17 five-set matches, a total robust enough that it's more or less understood we should sit tight, painfully tight, for a long while.

Isner is blessed with a good blend of cool and moxie in his blood, but he's also been haunted by results that haven't always gone his way. Believe it or not, the 6-foot-10 American's five-set record was a dismal 5-12 - and now ...

The Americans will need something of a miracle to climb out of the 0-2 hole they've fallen into during this best-of-five tie, and they'll need to mount an unlikely comeback in front of a raucous British crowd in Glasgow, Scotland. Earlier in the day, Andy Murray beat Donald Young in four rather uneventful sets.

The Bryan brothers will take the court Saturday and should give the U.S. a slither of life, but with one more loss in the next two days, the U.S. will be relegated to the World Group Playoffs, a competition that is essentially the Triple A of Davis Cup.

Wondering what the likelihood is the U.S. will come back? May we refresh your memory and rewind back to the 1934 Inter-zonal final in London, when American Frank Shield knocked off Vivian McGrath 6-4, 6-2, 6-4 to lift the Yanks, who lost their first two matches, to a 3-2 win over the very team their currently trailing, Great Britain. That was the last time the U.S. completed this remarkable feat. Overall, the U.S. is 1-38 when trailing 2-0.

"History is not kind to teams that go down 2-0, but we still have a chance, " United States captain Jim Courier told reporters after Isner's loss. "If we win the doubles tomorrow, we will take it one at a time, and hopefully we will get into the fourth match live and John will let it rip.”

The Isner-Ward battle was the longest U.S. Davis Cup match since the introduction of the tiebreaker in 1989, nine minutes longer than the Dmitry Tursunov-Andy Roddick squeaker in the 2006 World Group semifinals, which the Russian eventually won 17-15 in the fifth.

This plight of U.S. men's tennis isn't a new revelation, far from it, but just as we were starting to harvest a few happy vibes - Young reached the Delray Beach final and Ryan Harrison sliced his way to the Acapulco semis - reality hit again, and hard.