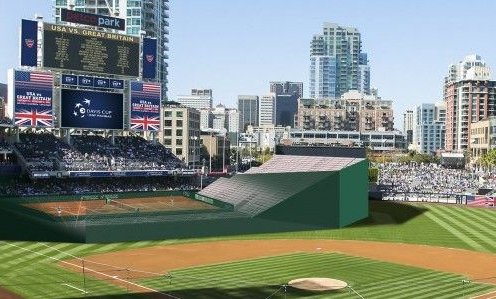 San Diego's PETCO Park will serve as the host site for the first round of the 2014 Davis Cup, set to unfold from Jan. 31-Feb. 2. The final 16 national teams comprising the World Group include Argentina, Australia, Belgium, Canada, Czech Republic, France, Germany, Great Britain, Italy, Japan, Kazakhstan, Netherlands, Serbia, Spain, Switzerland, and the United States. From the list, the top eight countries have been seeded and paired up with an opponent for the first round, with the tournament's two founding nations, the sixth-seeded U.S. and Great Britain, set to square off for the first time since 1999. The U.S. has prevailed in 11 of its 18 meetings with Great Britain, including the last four, and currently owns the most Davis Cup tennis titles with 32, though has not won since 2007.

The two-time defending champion Czech Republic earned the top seed and will host the Netherlands, while other matchups include No. 2 Serbia vs Switzerland, No. 3 Spain vs Germany, No. 4 Argentina vs Italy, No. 5 France vs Australia, No. 7 Canada vs Japan, and No. 8 Kazakhstan vs Belgium. Davis Cup tickets are available now in the form of single-day and multi-day passes.