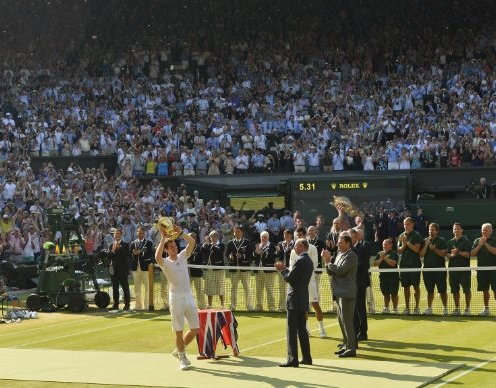 The ESPN family of networks will have a ton of coverage for the US Open and their press release on the topic has the full slate of coverage, including over 400 hours online and on ESPN3 and over 100 hours of live TV on ESPN and ESPN2 as well as the WatchESPN site.

The network goes hard when it does tennis and with Chris Fowler anchoring the coverage, everything runs smoothly. Serena Williams and Rafael Nadal are the favorites and coverage started on August 26 and will continue for two weeks. The network will also air the doubles championship on Sept. 8 as well as many other matches from the Billie Jean King National Tennis Center.

SportsCenter will have live segments throughout the week and ESPN is also doing a number of features on players during the tournament as well.

From the release: the broadcast team:

Darren Cahill, who once reached the US Open semifinals and the Australian Open doubles finals and went on to coach fellow Australian Lleyton Hewitt and Andre Agassi, has worked for ESPN since 2007.

Cliff Drysdale, who was inducted into the Tennis Hall of Fame in July, reached the US Open finals and is a two-time Wimbledon and French Open semifinalist. He has been with ESPN since its first tennis telecast in 1979. Drysdale was a leader on the court - a top player for many years who was one of the first to use a two-hand backhand - and off the court, as the first president of the ATP.

Chris Evert, a Hall of Famer who joined ESPN in 2011, counts a record six US Open titles among her innumerable career highlights, including 18 major titles and the best career win-loss record in history.

Mary Joe Fernandez, who played in three Major singles finals and won two Majors in doubles, won a Gold Medal in doubles at the 1992 and 1996 Olympics and a Bronze in singles in 1992. An ESPN analyst since 2000, she leads the United States' Fed Cup team and coached the 2012 U.S. women's Olympic team.

Chris Fowler, who joined ESPN in 1986 and has hosted College GameDay on football Saturdays since 1990, has hosted tennis since 2003, branching out over the years to also call matches. His diverse resume includes World Cup soccer, college basketball including the Final Four, the X Games and Triple Crown horse racing events, after first serving as host of Scholastic Sports America and then anchoring SportsCenter.

Brad Gilbert, whose flair unique nicknames for players has enlivened ESPN's tennis telecasts since 2004, parlayed his playing career - once reaching the quarterfinals of the US Open and at Wimbledon - into coaching Andre Agassi (six Major titles with Brad), Andy Roddick (US Open victory) and Andy Murray.

LZ Granderson, a senior writer for ESPN The Magazine (and formerly a tennis editor) and ESPN.com who has covered the sport for years, will provide his perspective in reports and features. He often appears on SportsCenter, Outside the Lines and other ESPN programs. He also is a contributor to CNN and CNN.com and has previously worked at the Atlanta Journal Constitution.

Where Can I Watch Tennis 2013 us open