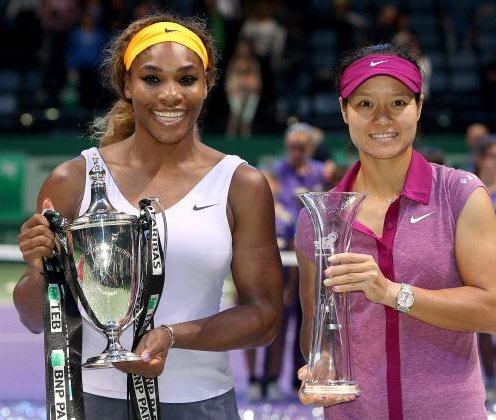 Maria Sharapova in the first round of the Australian Open 2015, in Melbourne. Photograph: Clive Brunskill/Getty Images

The Australian Open is back on. Having spent much of the endless, hot summer holidays of my youth glued to the box watching tennis, I realise these days I haven’t kept up to date with the players as much as I used to. Nonetheless I still find having the tennis on in the background somehow strangely comforting.

Perhaps it’s because it reminds me of a time when our family would all gather in the scorching heat as closely as we could next to both the TV and a portable air conditioner that needed constant topping up with water (whoever thought mixing electricity and water was a good idea?). Night after night, I would watch men and women bash away at that evil green ball, while I squirmed around, moving my position in a vinyl bean bag trying to avoid the sweaty spots. Good times.

Some 30 years later I’m now on a couch, and yes, slightly larger and probably holding a glass of wine. But I’m still watching the tennis. There is something especially calming about a soundtrack made up of moments of enforced crowd silence, peppered with the gentle, rhythmic bouncing of a ball and an occasional grunt.

Much remains the same, with the exception being player outfits. Year after year, the big names provocatively fiddle around on the fringes of what’s considered acceptable attire, and nudge the strict dress code enforced by Tennis Australia. This year, some of the players have already been criticised for their overly bright choices. Usually, once the competition hots up, fashion faux pas are quickly forgotten for the real issues of match play.

So why is it that while players can push the colour and style of clothing to the limits, it’s still pretty much de rigueur for the women to wear skirts. While there’s much talk about tennis fashion, does no-one think the skirt thing is a little weird and odd – and dare I say it, old fashioned?

Perhaps “skirts for the ladies” is a hangover from days when it wasn’t culturally acceptable for women to wear pants, and the rules were likely concocted by a bunch of men who really had nothing to do with the washing and pressing of whites, otherwise they never would have chosen such a difficult colour. I’m assuming it was also around the time when women were required to ride side saddle on a horse in public for some baffling reason, like protecting reproductive lady parts or some such nonsense.

I understand that tradition is a lovely thing (colour rules are not gendered so I have no problems with that) but why are there so few women wearing shorts on court? It’s 2015 people.

Of course, tennis players do want to look good. We all do. Looking at pics of some players at recent pre-match tennis functions in their fashionable best, for many women shorts were the order of the day. So why not on the court? Is that considered too radical in these neo-conservative times? Is it a sponsorship thing, reflecting a social pressure on women to look sexy at all times?

Personally, I think it’s time for more women to start wearing shorts on court. It’s practical for one. They’re not out there flashing their undies if they don’t want to, and I’m sure it’s easier to stuff balls in pockets than under the rim of tight knickers.