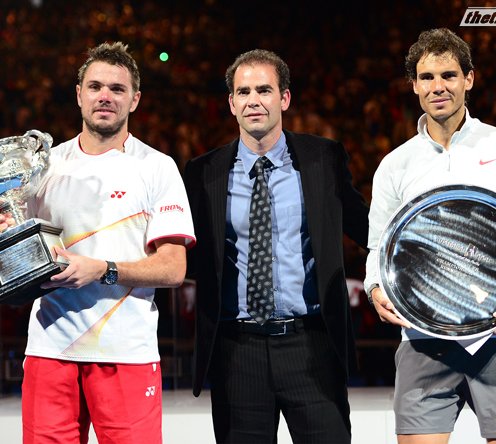 MELBOURNE—Unless there are bigger duds on the horizon, the fourth-rounder between Victoria Azarenka and Sloane Stephens will go down as the Match That Wasn’t at the 2014 Australian Open. As the two women walked down the tunnel into Rod Laver Arena, both of them safely lost in the music on their ear phones, expectations were high for the battle between these non-besties. Vika and Sloane had played the most controversial match of last year’s tournament, a semifinal that Azarenka won after choking match points and then getting relief from a medical timeout. This year, Stephens said that, despite living in the same city and sharing a management agency, their relationship was “non-existent.”

So, it seems, is any kind of on-court rivalry. Azarenka went out of her way to make sure of that today, with a 6-3, 6-2 win that, at an hour and 31 minutes, felt far longer than it needed to be. Azarenka broke early in each set and never trailed, but what was especially impressive about this win was how relentless, how hungry she remained when she had the lead. All great players can fight from behind; today Azarenka showed what it means to fight from ahead.

The contrasts couldn’t have been more obvious. Azarenka hit with purpose and conviction, and when she had the advantage in a rally, she pressed her case by moving forward—Vika was 13 of 17 at the net. Stephens, on the other hand, was listless and dismally inconsistent for long periods, and even when she did hurt Azarenka with a shot, she hung back, content to rally from behind the baseline—Sloane made just eight trips to the net. Stephens, who was suffering from a niggling left wrist injury today, has a smoothly athletic game, but she can fall in love with those fetching strokes. She could take a page from Vika’s book of intense, aggressive point-construction.

If she does, Stephens might want to start by watching this match, because it was Azarenka at her intense;y constructive best; she used her always-boiling emotions, rather than letting them use her. Vika and Sloane hit the same number of winners, 20, but Azarenka made 12 fewer errors. Her game isn’t about blatant power, or putting the ball past her opponent with one swing; it’s about building rallies shot by shot with her mix of pace, accuracy, and foot speed.

Vika did that from start to finish, and she wasn’t satisfied with a single break of serve in either set. With Stephens serving at 1-4 in the first, Azarenka went up 0-40 and held six break points before finally failing to convert. With Stephens serving at 1-3 in the second, Azarenka again knocked on the door, squandering three more break points. Finally, at 4-2, her persistence paid off, as she broke Sloane to seal the match. Vika’s only problem today was a self-inflected one—she double-faulted seven times. Despite that, Sloane couldn’t earn a single break point.